My step-father recently passed away, and my mother received this letter from a company called DCM Services claiming that they were collecting on my step-father’s accounts at the request of Chase Bank.

The account was not delinquent and the letter came less than 60 days after the death. Chase assured my mother that they would never turn an account over for collection without contacting her, and never if the account was current.

This is a complete fraud trying to take advantage of an elderly woman in a time of grief. Please pass this warning along to anyone you know who has had a recent death in the family because these jerks probably have those folks on their radar screens.

Mom contacted the FBI, and anyone who receives one of these letter should do the same. 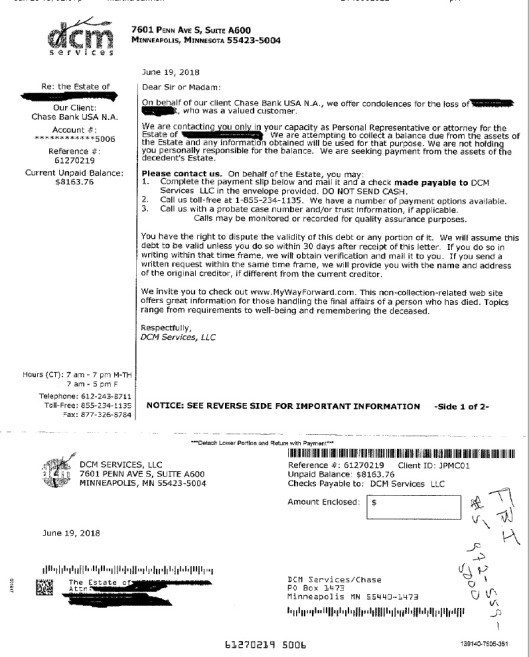 Dust motes in the sunbeam gave the tan cowboy hat on the table a fuzzy quality like a faded tintype still life. A scarred boot heel and sole bounced with an unheard rhythm atop the owner’s knee as a page in the heavy book scraped against the fabric of the man’s shirt.

“What are you reading?” the breathless voice from the bed barely audible above the hospital background.

“It’s called O Pioneers! By Willa Cather,” the man in the chair answered.

“I thought it might be The Bible when I saw the book mark,” wheezed the man in the bed.

“Not likely.” The faux silk ribbon was laid between the pages and the book closed. “I sent Mom home to rest a bit. She hasn’t been home in two days.”

A labored inhalation, “Is it a good story?” The shrunken man in the bed tried to shift, but his strength failed and he settled back.

“Can’t say I care for it much,” the man in the chair rose, and helped the other move. Walking around the bed to maintain eye contact, “It’s about a Swedish woman who buys up a bunch of land from other farmers that can’t prove up their homesteads.” He leaned against the wall, “Pretty dull reading so far, but I have hopes for it.”

“Your sister has been here a few times…,” a heavy breath replaced the one that had fled in the rush of words. “Your Mom comes when she can…Why…?”

“Am I here all of a sudden?” the man finished.

A nod followed a wheeze.

“I’m not sure,” the man rubbed his scalp. His shirt cuff pulled loose a turf of salt and pepper hair leaving a devil’s horn protruding above his ear. “Partly to give Mom some time off, and partly because I was hoping we’d have a few minutes to talk.”

Curiosity sharpened the old man’s gaze, “What about?”

“You mostly.” A step away from the wall and no room to pace, so the man leaned back again. “I’ve always wanted to tell you some things, and now we’re almost outta time.”

“Say it,” was followed by a moist cough. “I’m not getting any younger.”

The man pinched the bridge of his nose and spoke through his hand, “When you and Mom got together, I didn’t have much hope.” The hand dropped and he looked at the older man, “Figured you were just another bad decision in a long line of them. I was wrong.”

“That all?” came the wheezing response.

The man nodded, “I needed to tell you that, and to say Thanks for sticking with her all these years. I know it wasn’t easy.”

The old man took a deep breath, “You don’t think much of anyone do you?”

“Only until I get to know them,” the man agreed. “After the new has worn off, they’re just as grasping, lazy, and stupid as all the rest.”

“Must be nice to be so…above it all,” the old man whispered.

The man chuckled, “A man carries the emotions he can afford.”

“If that’s how you think,” wheeze, inhale, “Then why are you…here?” The old man drifted off. Only the raspy breathing affirming life continued.

His book seemed heavier than before as the man settled back into his chair. The dust motes were long vanished when the door opened.

The man closed the book and rose, “Hi Mom.”

“Sleeping for a couple of hours now,” he hugged her, and offered the chair.

She waved for him to sit as she approached the bed, “Has he been asleep since I left?”

“No, we talked for a few minutes,” the man resumed his seat. “I tried to thank him for taking care of you all this time, but he wasn’t having it.”

“He probably didn’t understand what you were talking about,” she fluffed the pillow slightly. “The nurse just told me that he’s having trouble staying focused.”

“Not to be indelicate,” the man shifted uncomfortably in the chair. “Where do things go from here?”

His mother sighed, and took her son’s place leaning against the wall, “He comes home on Friday.”

“I’ll have to get someone to come in to help,” she sighed. “There are really no options.”

The silence grew palpable as each retreated into their own thoughts. Finally she spoke, “I wish the two of you could have become friends.”

Her son shook his head, “No real chance of that.”

“I never understood that,” she moved closer to the bed. “You both love books and history, and the theater.”

“And we are pure purple poison to each other on everything else,” another headshake. “The only thing we really had in common is we both love you. For your sake, we both knew it was best we didn’t talk too much.”

She leaned over the bed, “How are you feeling?” A wet rattling cough was the reply. “Should I call the nurse?”

Mother and son lifted, turned, smoothed, and fluffed before stepping back. “Better hon?” she asked.

A weak nod before the old man looked at the boy. No, the man. Middle-aged with a family of his own, “Thanks…for what you said…earlier.”

He ignored his mother’s questioning look, “It only took me twenty years to say it. Glad I got here in time.”

To the Memory of